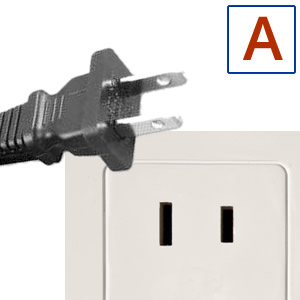 An electrical socket & plug type A are used in: North and Central America. For a complete list of countries using the Type A plug, see below.

This type of electrical plug is ungrounded (does not require a third grounding pin). It has two flat pins and one of them is smaller. The type A plug is very similar to the Japanese plug. The Japanese plug has one smaller pin. So you plug Japanese devices into a type A socket, but sometimes it's not possible plug a type A plug into a Japanese socket.

The pins on the type A plug have a small hole at the end. This is used to better hold the plug in the socket.

Power Plug type A is not compatible with any other type. To connect your devices you will need a type A .

Countries that use an power outlet / plug type A